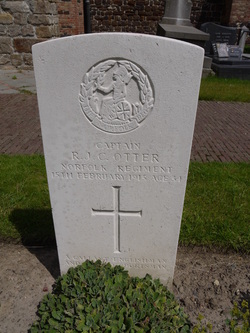 OTTER,
Robert John Charles.
Captain.
2nd Battalion,
Attached :-
1st Battalion,
Norfolk Regiment.
Dranouter Churchyard,
West-Vlaanderen, Belgium.
Monday 15-02-1915.
Age 34.
Son of Robert Charles & Marianne Eva Otter (nee North) of Royston Manor, Clayworth, Retford, Nottinghamshire, UK. Husband of Gwendoline Ethel Berners (formerly Otter), Served in the South African Campaign. He was a regular soldier, having joined the army (Norfolk Regiment), serving for some time overseas before taking part in the South African campaign in 1901 during which he was wounded. He was killed in action at Wulverghem and buried in Dranouter Churchyard, France Memorial in Clayworth St Peter: 'To the glory of God and in loving memory of Robert John Charles Otter, Captain, the Norfolk Regiment, eldest son of RC and ME Otter. Born Jany 12th 1881. Married 1914, Gwendoline Ethel Berners. Wounded in the S. African War 1901, killed in action at Wulverghem, February 15th 1915, buried in the churchyard of Dranoutre, France. His life he gave to his country, his soul to God.' His brother, Henry Royston joined the Royal Navy in January 1904 and joined HMS Canopus as a midshipman in 1908. In December the following year Henry was accidentally shot while he was practising target shooting with a revolver while he was at home on leave; he was seriously wounded in the head and died the same day

Stone Inscription :-  "A Gallant Englishman And A Good Sportsman".